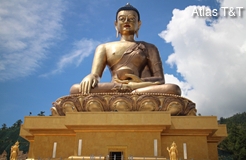 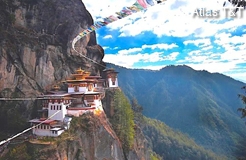 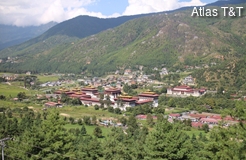 Prepare yourself to be captivated by the breathtaking structure of all kinds of buddhist shrines, architect and iconography and travel back in time when you witness with your bold naked eyes with the view of the famous Tigers lair.

Day 1. Paro - Thimphu (Capital of Bhutan)
1. Buddha point - the largest Buddha statue in the country, from there you can get a good view of the Thimphu valley.
2. Memorial Chorten- built in the year 1974 in the memory of our third king of Bhutan, His Majesty Jigme Dorji Wangchuck.
3. Tashichho Dzong - The“fortress of the glorious religion”

Day 2. Thimphu - Paro
1. Changangkha Lhakhang - it is right above Thimphu Valley, this temple and a monastic school was established in the 12th century on a site chosen by Lama Phajo Drugom Shigpo.
2. Motithang Takin Preserve – houses the rare national animal of Bhutan. Takin is listed by international conservationagencies as a vulnerable species and it is a rare animal found only in Bhutan, Nepal and Burma.
3. Folk Heritage Museum - the house replicates a traditional farmhouse and is furnished as it would have been about a century ago and have traditional Bhutanese lunch there.
4. National Institute for Zorig Chusum – or the school of Arts and crafts is an institute where student undertake a six year course on the 13 traditional arts and crafts of Bhutan. After our sightseeing in Thimphu we will drive to Paro.
5. Visit Kyichu Lhakhang - one of the oldest and most sacred temple in the kingdom.

Day 3. Tigress Lair
The hike is about 5 hours (round trip.) The trail is along an ancient path marked by river powered prayer wheels. As you reach Taktshang you will be struck by the architectural wonder of this most pious Buddhist shrine in Bhutan. Perched some 1000m, 3000ft on a cliff overlooking the valley, it would justifiably qualify as one of Bhutan’s wonders. Tragically wrecked in a fire early in 1998. It has been rebuilt to its original glory. It is said that the legendary Indian saint, Guru Padma Sambhava, flew from Tibet on the back of a tigress to tame five demons, who were opposing the spread of Buddhism in Bhutan in 746 A.D. Hence the name, Taktshang, or the“Tiger’s Lair.” Descend back to Ramthangka. If the time permits, drive further north to visit another symbolic structure, which is now in ruins. Drugyel Dzong, or “Castle of the Victorious Drukpa,” which was also built by the Zhabdrung to commemorate Bhutan’s victory over the Tibetans in the 16 From here, the Jomolhari Peak (“Mountain of theGoddess”) can be seen on a clear day (Alt. 7,329m/ 24,029ft.).

Day 4. Paro-Departure
After breakfast, drive to Paro international airport for your onward flight. 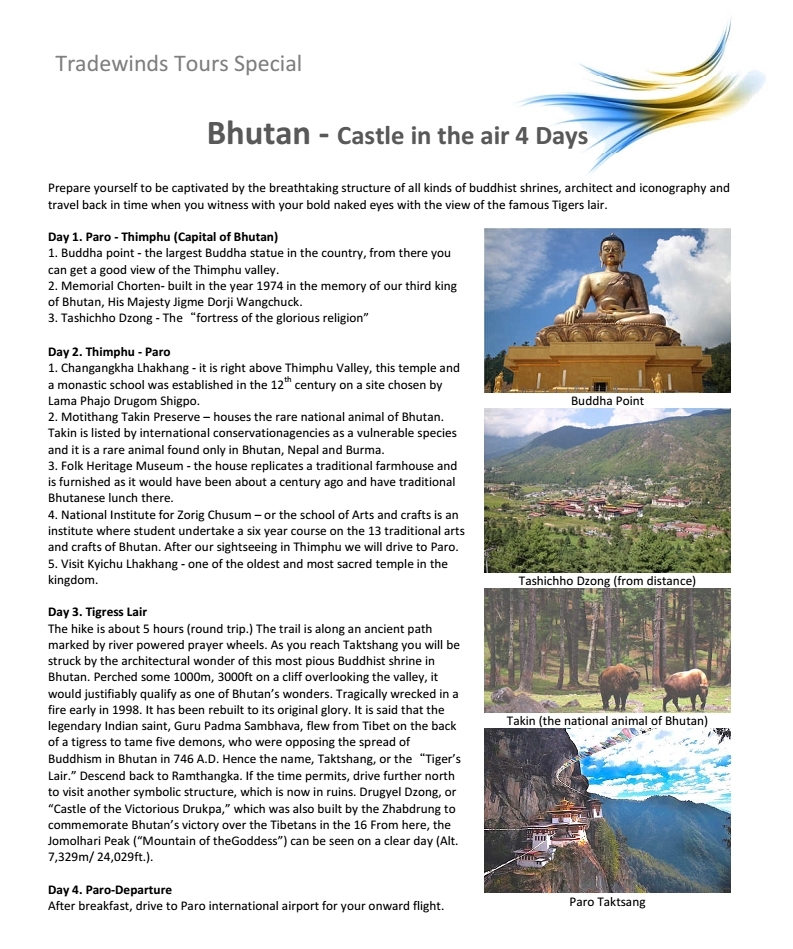